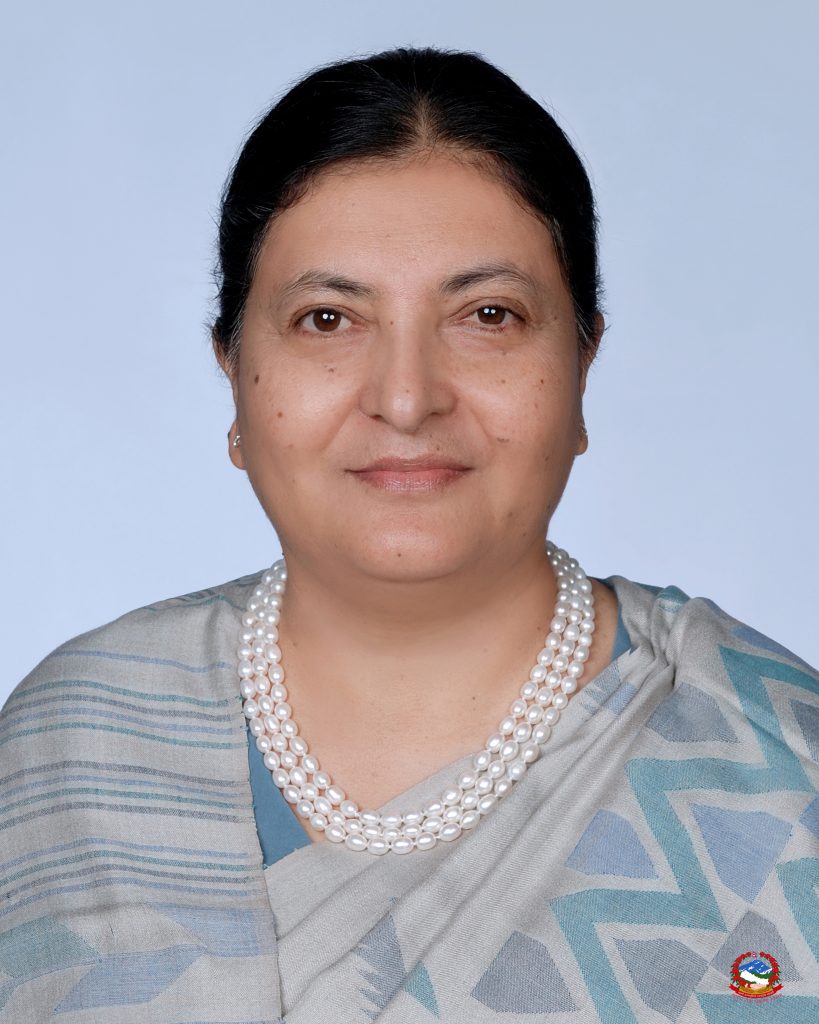 Present:
Mrs. Bidya Devi Bhandari is the second president of Nepal after Nepal adopted the democratic-republican system. She is the first female president to be elected by the parliament on 28 October 2015 after the promulgation of the new constitution. Similarly, she was elected for her second term on 13 March 2018 after successful completion of her first term.

Childhood.
President Bhandari was born in a middle-class farmer family to parents Late Ram Bahadur Pandey and mother Mithila Pandey. Born on 19 June 1961, in Manebhanjyang of Bhojpur, a hilly district in Eastern Nepal, she is the eldest of five siblings. She had a humble upbringing and she faced all obstacles and hardships a normal Nepali middle-class child faces.

Student Life and Politics
Mrs. Bhandari completed her school level education in Bhojpur and pursued her higher education in Biratnagar, Morang. Her early student life in the hills of Bhojpur was an important stage in her life when seeds of revolution and change were sown in a budding mind. She concluded that a progressive society can never be imagined without democracy and freedom. By that time, she was well acquainted with the hardships of Nepali society which encouraged her to devote herself in the leftist democratic movement against the autocratic Panchayat system. This was the advent of her long and arduous political journey. Her early affiliation to the leftist movement was marked by leading the Eastern Regional Committee of the All Nepal National Free Students Union (ANNFSU).

Married Life
Mrs. Bhandari got married to Mr. Madan Bhandari, a prominent communist leader in 2039 B.S. President Bhandari’s conjugal life lasted 11 years as her husband was killed in an unfortunate but mysterious road accident. After the untimely demise of her husband, raised two infant daughters Usha Kiran and Nisha Kusum on her own, as well as responsibly carried her political responsibilities.

Contribution to National Politics
Her organised political career started in 2036 B.S. as a member of the Youth League cadre of the Communist Party of Nepal (ML), formed in 2035 B.S., followed by the member of the All Nepal Women Association (ANWA) which was aligned to the CPN (ML). Her political journey constitutes dimensions as a student leader, women rights activist and a loyal party cadre devoted to values of democracy and freedom. Mrs. Bhandari has been incessantly contributing to ensuring women rights and raising awareness against issues of gender discrimination and oppression. In 2055 B.S. president Bhandari was elected as the president of All Nepal Women Association. During her tenure as chair of ANWA, she led different social and political movements for equal treatment of women. She was the architect behind the introduction of special parliamentary resolution for 33% reservations for women in all sectors of governance after the Constitution Assembly (CA) elections of 2062/63 B.S. which was institutionalised later in the Constitution of 2072 B.S.

Her popularity and success as a political leader proven by consecutive victories in the parliamentary election in 2050 (election held for the vacant seat after the demise of popular leader Madan Bhandari), the mid-term election in 2051 B.S. and 2056 B.S. and Constituent Assembly elections in 2063 B.S. and 2070 B.S. President Bhandari also served as Minister of Environment and Population in 1997 as well as the Minister for Defense from 2010-2012. Her tenure as Minister for Defense was highlighted by the management of ex-Maoist combatants adding further impetus to the homegrown peace process which is an example to the whole world. She successfully led the formulation of the national security policy.

Her arduous journey from a humble upbringing to the highest office of the country has made her a source of inspiration to all.